Our August newsletter is here:

We have just paid Calderdale council’s planning department the hefty sum of £9,240.  It’s a lot of money, but it is necessary expenditure and it’s in a good cause: this is what it costs in planning fees to apply for planning permission for twenty new homes.

Yes, after more than three years of detailed planning, we have reached the point where our application to bring homes back to one of Hebden Bridge’s earliest settled areas (the hillside above Bridge Lanes and off Heptonstall Rd) has gone in for planning permission.  We now have detailed plans for how the residential road once known as High Street can live again, as one-, two- and three-bedroom homes for renting at affordable rents.

We’d hoped to submit the application a couple of months ago, but after our April consultations (and in particular some detailed feedback from neighbours) we went back to the architects and asked them to make the development less intensive. What was originally going to be 27 homes is now going to be twenty: still very much worth doing, we think. And we’re excited by the sustainable architecture which is being proposed. These are, after all, going to be homes for Hebden Bridge people for all of the rest of the twenty-first century!

PS, We may be a charity but unfortunately community-led housing organisations like ours still have to pay the same in planning fees as commercial developers. We checked, of course, but those national government rules just can’t be changed, apparently.

It’s really not acceptable that many new homes built by commercial developers are poor quality and lacking in many basic elements of good environmental design. This is an issue which we know is close to the hearts of many of our members and supporters, and we were delighted at the big turn-out for the public meeting we held on Weds August 22nd with the theme Making New Housing Sustainable and Energy Efficient.

Our thanks to the three speakers who came considerable distances to be with us, and to everyone who contributed to th 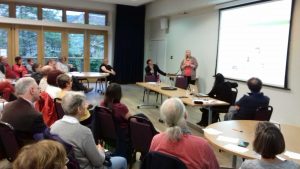 Our next public meeting is on Sep 24th, when the theme will be Investing Ethically in New Housing.  There will be plenty of time for discussion.  We expect that the meeting will finish at around 9 pm. All welcome!

The fifth and final public meeting in our current series will be on Mon Oct 29 (putting the vision back into public housing).

Two letters to put after our name

We heard recently that we have been successful in our application to become a Registered Provider – an ‘RP’.  This is what used to be known as a ‘registered social landlord’ and what it means is that we will now be able directly to tap into grant funding for affordable homes from Homes England, without having to ask a housing association to help us.  We wanted to retain as much control of the homes we will be building locally, and RP status will enable us to achieve this.

It means in particular that we can now immediately start moving on the development at Walsden, which – you may remember – is for six independent living bungalows for older people. We received planning permission for this last autumn and have been impatiently awaiting the RP status to be able to appoint the contractor. Finally, finally, we will have something happening on the ground!

Incidentally, we have been seen as a national test case in regard to becoming an RP. Most Community Land Trusts elsewhere have so far chosen not to go through the extre 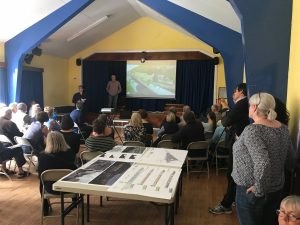 mely rigorous process of assessment, so we are conscious that we are under the spotlight at the moment in this regard. It’s good to have come through the process successfully.

Photo: Our April consultation on the Hebden Bridge development

Thank you if you came along in February, when we launched our community share ‘pledge’ leaflet at Hebden Bridge Town Hall (photo below). We were pleased to have such a good turn-out and heartened by the interest shown.

You’ll know if you were there that we are planning to launch an ambitious community share issue later in the year, to raise £500,000 in investment from within the community to help fund the proposed Hebden Bridge development of affordable homes to rent. (You’ll also know that we won’t be asking for anyone’s investment until we have planning permission and have completed work on the share prospectus.)

We are currently expecting the planning process for the HB development to be over by November.  What this means is that we expect to launch our Community Share issue, which has had to be temporarily put back because of the planning delay, in November or very early December.  Again, more details soon � and, if you are one of our more than thirty would-be investors, thank you for your patience.

£500,000 will be the largest community share issue ever attempted in Britain for community-led housing, but with strong early support we’re feeling increasingly confident that we will get there.

We’re also delighted to say that, following discussions with two of the trustees and the CEO of the Community Foundation for Calderdale, the Foundation’s trustees have taken an in-principle decision to invest £100,000 in the Hebden Bridge development.  This is subject to discussions on the terms, but is a very welcome fillip to the CLT.  Investment from CFFC will be a valuable additional source of investment capital for what we’re planning to do.